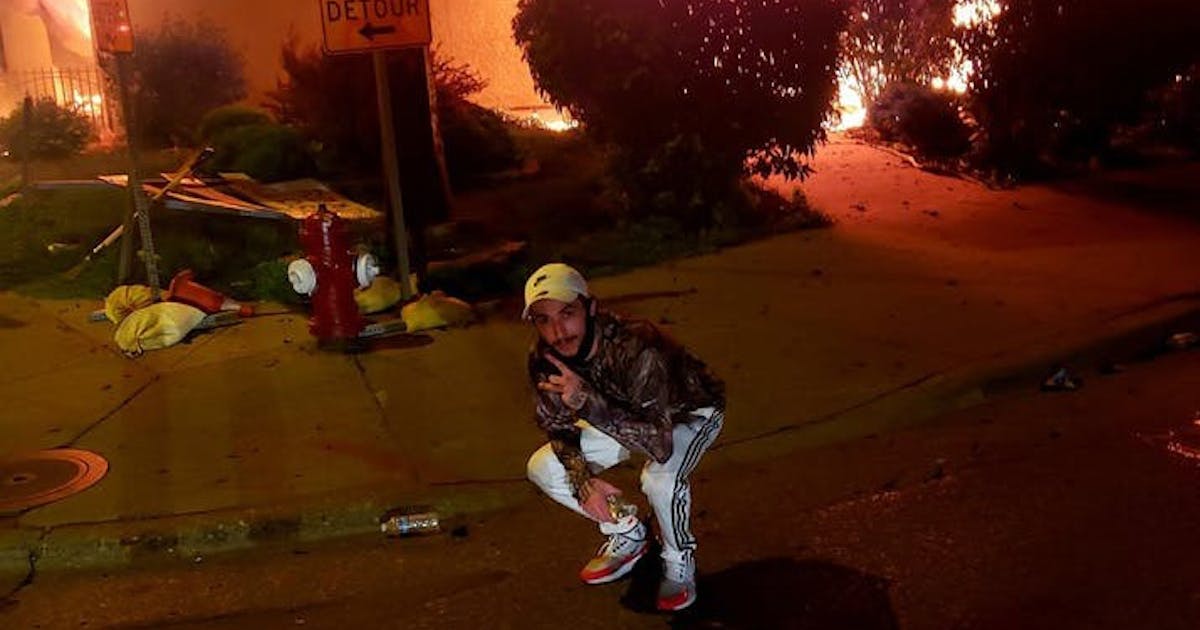 When the FBI caught up with Matthew Rupert, it already was sitting on a mountain of evidence implicating the 28-year-old in a crime spree spanning three days and two states.

They had Rupert in writing, describing his plans to drive from Galesburg, Ill., to Minneapolis as lawlessness erupted after George Floyd’s murder, and then on to Chicago to “riot this mf!!!”

They had photos of Rupert posing, head held high, as flames rose in the backdrop. They had video showing him looting a convenience store, doling out explosives to be thrown at police and walking out of a Nicollet Avenue Sprint store declaring, “I lit it on fire.”

The FBI did not need an informant for the damning evidence — Rupert collected it himself. He posted it on his Facebook account, “El Ricco Rupert,” and streamed his actions on Facebook Live for hours.

“Nothing like snitching on yourself,” one follower remarked. Rupert recently pleaded guilty to arson and faces a five-year minimum federal prison sentence, a conviction built almost entirely on evidence he posted. He is not an aberration. More people are broadcasting their illicit acts on social media, effectively informing on themselves.

It’s a trend called “performance crime,” a bewildering phenomenon often driven by a quest for online clout and not limited to any age group, education level or ideology.

On Jan. 6, hundreds of supporters of former President Donald Trump streamed to the social media site Parler as they stormed the U.S. Capitol. Victoria White, a 39-year-old from Rochester, Minn., posted updates to Facebook of her participation, including daring police to “come get me,” according to federal charges. Jonah Westbury, 26, of Lindstrom, Minn., published selfie videos inside the Capitol that day, charges say.

These crimes are growing more popular, said Ray Surette, criminologist and media professor at the University of Central Florida in Orlando. And they’re making criminal investigations easier for law enforcement agents, who need look no further than a computer monitor to find a suspect.

“If your buddy in the Proud Boys can see this, so can the FBI,” said Surette.

Surette believes performance crime is rooted in a combination of media obsession and confusion.

Social media users, brainwashed by online echo chambers and blinded by their cause célèbre, act with reckless disregard for the surveillance state they operate within, he said.

“They’re performing a crime for public consumption,” said Surette. “They’re in this packed arena, but they’re only looking at the front row, which is filled with their friends and buddies. It’s as if they’re ignoring that all of these other thousands of unknown people — some are law enforcement, some are prospective employers — are also watching this performance.”

The trend is very much of the social media era, but performance crime isn’t entirely new.

Surette’s research shows it contains elements of the same morbid appeal that for centuries beguiled audiences at public executions and motivated attention-hungry killers to write letters to newspapers. In the Depression era, Americans’ fascination for the underworld turned gangsters like John Dillinger and Al Capone into celebrities akin to movie stars.

The rise of the internet brought new opportunities for criminals to show off their work. It led to the popularity of the underground series “Bumfights,” in which film producers paid homeless people to perform dangerous stunts and brawl in the streets. It enabled international terrorists to send a message to their enemies through viral videos of beheadings.

Next came social media and cellphones with high-resolution cameras, which launched the subculture into a mainstream industry with a worldwide audience.

Today, sexual assailants post footage of their crimes on Facebook. Gangs taunt one another on YouTube and settle the score with bloodshed. In 2015, a former TV journalist in Virginia shot two onetime colleagues while streaming live to his Facebook page.

“Social media brings out the worst in humanity,” said Surette. “Some of it is enlightening, but it definitely shows us at our worst.”

“There’s no attention to the fact that any of this is actually real,” Helfgott said.

Social media have helped create a new brand of criminal. The Zodiac Killer, who murdered several people in California in the 1960s, invited an audience into the mind of a psychopath.

Now ordinary people commit crimes because there is an audience.

“It’s a signature element of their crimes,” Helfgott said. “It becomes the very essence of what they’re doing. They’re getting something out of it, as part of a motivation for their crimes.”

Performing for an audience

This appeared to be the case for Bryce Michael Williams, a 26-year-old college graduate with no prior criminal history, who streamed to TikTok as he and others stormed Minneapolis’ Third Precinct police headquarters last summer.

Williams lit a Molotov cocktail that someone else threw into the building, contributing to the blaze that would engulf the station and turn into a lasting symbol of the riots.

In court last month, U.S. District Judge Patrick Schiltz remarked on Williams’s otherwise unblemished past, calling him a “good person who made a terrible mistake.” Burning down a police precinct wasn’t exactly a small foray into the criminal world, however, and it bought Williams a sentence of more than two years in federal prison and $12 million in restitution.

Williams told the Star Tribune he was not overtly political before Floyd’s killing — he had never even voted — and described himself online as an aspiring TikTok influencer.

To that end, it worked. Williams gained 150,000 followers after posting footage from the riots.

In 2020, an informant tipped off law enforcement that a 22-year-old from Owatonna was dealing unlicensed guns. An agent with the Bureau of Alcohol, Tobacco, Firearms and Explosives, using a dummy account, befriended Dayton Sauke on Snapchat.

The federal agents watched as Sauke published images of himself posing with guns — among them, a photo of what he called his “sawn-off illegal” shotgun — and expressing his desire to kill a police officer.

“Doesn’t matter if you’re a felon or not,” Sauke wrote over one image of a modified shotgun, “you should be conceal [and] carrying everywhere you go in 2021. I can help you with that.”

Two undercover ATF agents took him up on the offer. They arrested him after Sauke sold them a homemade gun with the promise of more to come, according to charges.

The case reflects how social media is changing law enforcement tactics, opening up a new world of investigative leads.

“Sometimes we don’t have to go and do an undercover deal, because we already have the evidence,” he said.

Agents discovered that members of HAM Crazy had posted rap videos dissing their rivals on YouTube, some featuring the gang members pointing guns at the camera.

In charging them with illegally possessing firearms, prosecutors included screen shots as proof they directed “threats of violence and intimidation against rival gang members through social media platforms.”

One gang member later boasted about the indictment in a YouTube video that spliced in a TV news report on their case.

“It makes law enforcement’s job easier,” said Folk in a recent interview. He peeled open a copy of the arson charges against Rupert.

“There are literally statements in here where he says things like, “ ’I’ve got some bombs if you all want to throw them back,’  ” Folk said. “At one point he says, ‘Light that [expletive] and throw it at them,’ referring to police officers.

“This isn’t normally evidence you’d traditionally think of getting live on camera. This is pretty remarkable, that it’s in real time, it’s verbatim and it identifies your criminal. So it definitely has changed how we do our jobs.”

You have limit - count - 1 articles left